The Rise of TikTok Brands, it’s time to come on board the TikTok trend.

Ever wondered what’s with the hype over the “Roxanne” dances? Or felt confused over the meme-ification of Fei Yu-Ching’s “Yi Jian Mei”? These are songs that went viral on TikTok, a short-form video app that has been gaining traction since 2018.

TikTok is particularly popular among the Gen Zs – those between 16 to 25 years old. Owned by ByteDance, it started out as a way to share short dances, lip-syncs, and comedic videos. Now, it even includes topics such as health, cooking, and short stories.

Marketers too, have started to embrace the TikTok trend. If your target demographic is between 16 to 25 years old, it might just be the perfect platform to reach them. 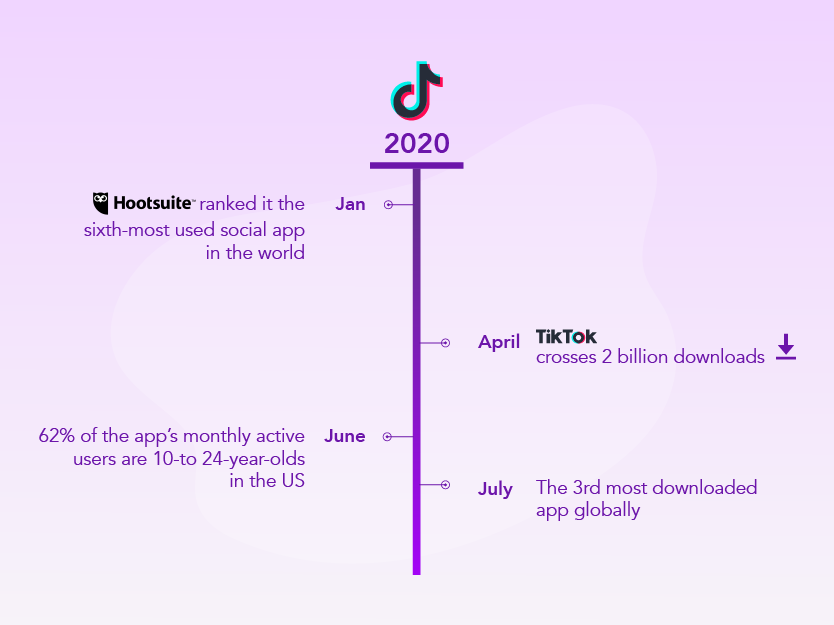 With 1.2 billion users globally, TikTok is a huge market just waiting to be tapped, even if you’re producing niche content catered to a specific audience. Just being on the platform increases your audience pool.

The appeal of TikTok

With each clip ranging 6 to 15 seconds (although you can string 4 clips together to make a 1-minute video), it’s an effective way to engage people with short attention spans.

It’s easy and convenient to create since the app includes all the necessary editing tools and effects. More importantly, it’s a platform where creativity thrives and less obvious advertising angles appeal to the younger generation. 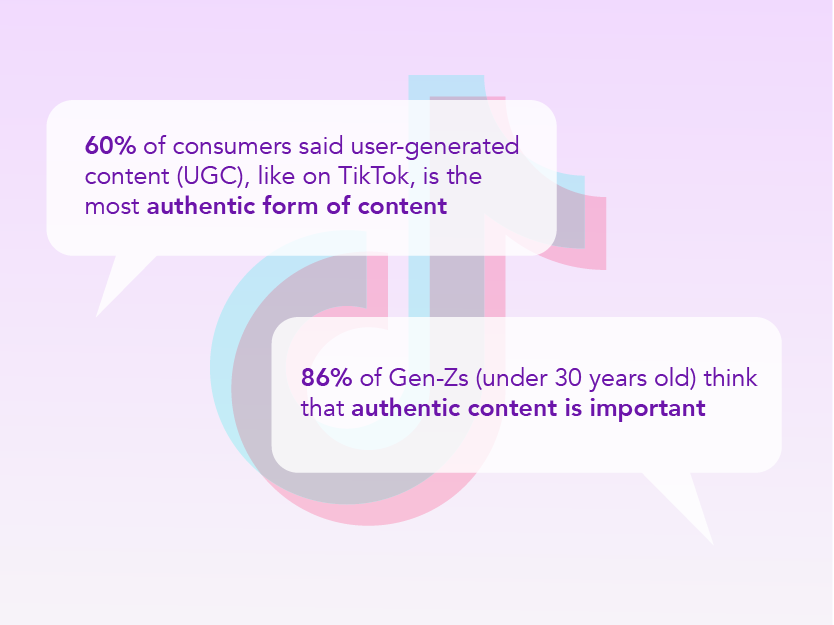 Even though overt advertising is scorned at by the younger generation, it’s not a dead end for marketers. There are a few opportunities advertisers can look into.

If you want an effective marketing campaign on TikTok, try influencer marketing. Gen Zs generally dislike traditional advertisements, so you need to get creative to appeal to them.

Influencers, with their own content and an established rapport with their audience, can be an effective bridge for brands. Creating social videos with influencers can greatly boost your social media audience.

It also helps that one in three people trust the opinion of influencers more than they trust the word of the company. That’s because influencers are seen to be more objective than brands promoting their own products.

While some influencers have more than a million followers, relevance is more important than reach. Choose influencers who post content in your niche. Look at LilyG, who is known for baking, if you’re selling baking products for example.

For cooking-related products, there is David Templer, who creates humorous cooking videos and has 340k followers.

Influencer campaigning is more effective if you leave the idea generation to the creativity of the influencers. They’ll have a better idea on what works and what doesn’t, and the ways to best appeal and engage their audience.

Popular comedic and creative influencers include DTay, who has 9.6 million followers, and Caitlin Reilly, who has more than 886k followers and is known for her comedic impressions.

Scripted ads tend to be more stilted and jarring, especially if they’re not in the usual style of the influencers. By dictating how the ad should be, brands risk viewers realising that it’s a marketing scheme and being turned off immediately.

There’s another secret behind TikTok’s success: its algorithm.

The algorithm shows new videos between popular videos before tracking viewer’s behaviour. If users react positively – watching to the end, liking the video or leaving a comment – then the video will be shown to even more people. Videos that perform well can quickly go viral.

TikTok uses cutting edge AI for both the consumers and producers. For producers, the AI simplifies video editing and suggests enhancements that are trending. This makes it easier to produce content with proven appeal.

Much like sites with recommendation algorithms such as YouTube or Facebook, AI is used to analyse and track individual preferences, before curating videos just for you.

But that’s not all. Because TikTok is on autoplay, it doesn’t just recommend a list of videos for users to decide – it shows them to the viewer directly. TikTok decides what you’ll watch based on your past viewing behaviour.

These tweaks in the algorithm drive high levels of user engagement as consumers are fed endless videos.

Besides influencer campaigns, there are five types of TikTok advertisements that you can consider.

In-feed video ads are typical video ads that appear between videos. It’s just like the ads in Facebook Stories and Instagram Stories, but they run for as long as one minute. Make these ads short and sweet for the best outcome.

Clarins’ #Reboost ad is a good example of an in-feed video ad.

Branded hashtag challenges are exceedingly popular – and they’re often equally successful. All you need is to create a hashtag challenge, which usually comes in the form of lip syncing, dancing, or makeover.

The hashtag challenges are often paired with influencer campaigns to kick off the challenge and ensure that it gains traction.

Anyone can join the challenge and post their version of the video with the brand’s hashtag. As this form of advertising encourages user-generated content (UGC), they go viral very quickly. It’s a fun and engaging way to generate mass exposure for your brand, with little work on your part.

In the US, CashApp made use of influencer campaigning and the hashtag #cashappthatmoney to raise brand awareness. Besides sponsoring influencers, they hired Shiggy, a social media influencer, to write a song for this challenge.

Hashtag challenges that involve makeovers are widely successful too. Take a look at the recent e.l.f. Cosmetics’ #elfMagicAct challenge, their second viral challenge on TikTok.

It was a massive success, with the first hashtag surpassing one billion views in three days. An original song “Magic Act” by award-winning artist M. Maggie was written for this challenge. Their first challenge in 2019, #eyeslipsface, was a promotional challenge that had more than 6 billion views.

Or check out Mucinex’s witty #TooSickToBeSick challenge, which had more than a billion views.

For the challenge, people transformed from being sick zombies into having a stunning appearance. Timed perfectly with Halloween, it makes use of the slang ‘sick’ and Halloween makeovers to show the transformative power of Mucinex’s Nightshift.

If you want something different, you can make your brand hashtag challenge something wholesome, such as Colgate’s #MakeMomSmile. Specially catered for Mother’s Day, it’s a subtle and fun way of promoting Colgate without even mentioning any products or brands.

If you want to spice things up and boost your brand’s interaction with users, create some branded effects like shareable stickers and Augmented Reality (AR) filters.

Just recently, TikTok added ‘Gamified Branded Effects’ templates for brands to further integrate themselves with an interactive effect that users can play.

Users record themselves interacting with branded elements, such as playing games with the new gamified effect, or changing their appearance with your brand filter.

A Singaporean radio app, Camokakis, launched a challenge #SGUnited in March to keep spirits up and promote unity during the pandemic. The challenge made use of a filter which demonstrates good hygiene practices such as hand-washing and wearing masks when sick.

Some campaigns combine branded effects, hashtag challenges, and influencers to drive their campaign.

In June, Hyundai partnered with popular K-pop boyband BTS to create a #PositiveEnergyChallenge to promote a sustainable future towards hydrogen energy.

The challenge started on World Environment Day and encouraged users to take videos of themselves with water (eg drinking water).

A huge motivating factor is the prize, which includes handwritten stickers and merchandise from BTS. This taps on the BTS fanbase to increase participation. And it successfully gained more than 2.8 billion views.

For brand takeovers, ads will show on TikTok’s launch screen as a three second static image, or a three to five second video without any audio. It’s exclusive to the user’s category, so the ad remains catered towards the brand’s niche.

Top view ads are the first in-feed videos that appear after three seconds. They show up at the top of the “For You” page and is accompanied by audio.

Appealing to youths is tricky. It’s easy to appear out of touch. The least you can do is keep up with the latest trends.

TikTok is the latest hype that marketers should have at their fingertips, and it’s likely to continue to grow in influence. If your target audience is between 16 to 25 years old, don’t miss the opportunity to make TikTok part of your marketing strategy — at least until the next big thing comes along.