How to use video and social media for your business We look at the opportunity for video marketing and the social media platform to best suit your needs.

Are you finding it difficult to create enough content to meet the demand from and for your business? To make things worse, the landscape for social media — where you share this content — is evolving even more rapidly.

Nonetheless, the challenges for both are similar. Often, ranking in Google and maintaining — or even better still, improving — engagement on social media platforms can feel like an endless game of catchup. In some sense, it is. But it doesn’t have to be.

Here’s an easier way to deal with both: social videos — videos designed for social media channels.

Consider these videos the same way you would a TV ad. While the premise is the same, it requires a different approach depending on the medium and platform you are using.

Rather than feeling beholden to tech companies and their algorithms, and adjusting your approach every time the algorithm changes, make amazing content with social videos, for everyone!

Why social videos? It’s predicted that by 2022, 82% of all internet traffic will be video — that’s in addition to the one billion hours people already watch on YouTube each day. India has shown the biggest growth in online video views, though there has also been significant growth in already huge markets across the APAC region.

Having said that, there are some evolutions that you need to bear in mind for your output and for your social media channel. Don’t look at it as an additional requirement; make it a part of your every day, basic guidelines for content creation and strategy.

It’s your story that matters

Danone Dumex Malaysia won an award for its online video campaign targeting Millennial Malay moms while tapping into the children’s YouTube phenomenon with its Dugro Buddies series. It found its niche and ran with it, to great success.

If you don’t know what your thing is, figure it out. It could be romance stories for teenagers like what Unilever did for the launch of its new Cornetto “Unicorn” variant, or a catchy gibberish song to create humour in a situation for car owners looking for insurance. But, whatever it is; that’s what you’ve gotta do.

The best place to start is to look at your audience (isn’t it always?) and build a persona. Who is buying your product, who is it for, and where are those consumers coming from?

Whatever the case, it’s all about video. And good video isn’t just visual. More importantly, it has to tell a story. Your brand’s story.

Present it how your audience wants it

Sure, some videos might work better on TikTok and Instagram stories than Facebook. But that can also be seen as just a ratio thing. Back in 2016, anyone in digital media would have told you that landscape video was the way to go. But younger markets are entirely at home with portrait videos because of TikTok and IG — IG live especially. Integrated campaigns can use different orientations for each medium, to great success.

Using different platforms also allows you to cater to various audiences for the same product.

For example, this Vietnamese campaign (see the official English version here) was originally created for TV and YouTube to help create awareness of ways to prevent the spread of COVID-19.

As more people watched it, it transformed into a UGC (user-generated content) dance challenge on TikTok using the same campaign tagline/refrain, and it went viral. In fact, it was so successful, it made news around the world! This shows the importance of using multiple mediums and the approach that works best for those mediums.

In Thailand, Vichy used a few scripted videos on Facebook to launch a new product line using celebrities within the ads. The campaign made it the leading product within the category in just three months.

Social videos are great if there’s a good story and they suit your audience, but they also need captions. It’s estimated that around 80% of people watch video with the sound off, depending on the platform; these numbers are at their highest on Facebook.

Your journey to social media

So, which social media channel is right for you? The content can be the same but the channel matters, depending on where you are. 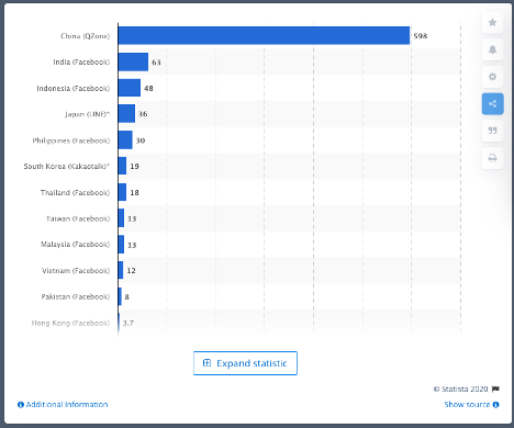 Number of users of leading social networking sites in the Asia Pacific region as of March 2013, by country or region (in millions)

Importantly, you need a different approach to target different countries. Different markets want to see different things. So you will need to figure out what would work best for your audience.

You might notice the huge numbers for QZone in China. QZone allows customisation of pages and places ads in QQ feeds similar to WeChat moments ads. Undoubtedly, the size of the audience should be enticing for anyone in the market.

How should you do it?

A few examples might help you figure out how you should do social videos.

TikTok: It’s where the kids are, and some companies have found unique ways to sell their wares by adopting the content TikTokers have proven is popular on the platform. There are over two billion TikTok accounts, and you might be surprised to discover it’s been downloaded most in India — although it has since been banned as bilateral relations between India and China have worsened recently.One of the more engaging events on TikTok are challenges. Dance challenges, tricks challenges, brand challenges — any challenge basically. Interestingly, a dance challenge called “the renegade” made this 14 year old famous globally.

Another engaging feature of the platform is hashtag challenges.

Prior to the TikTok ban in India, the skincare brand Clean and Clear used the idea of a hashtag challenge on TikTok, and the results are undeniable. It was one of the most successful branded hashtag challenges in the country, generating 1.96 billion video views and 172 million likes, comments and shares.

In China, the hotpot restaurant chain HaiDiLao took a slightly different approach using Douyin, the Chinese version of TikTok. It asked users to share the different ways they like to eat hotpot and more.

But TikTok is all about user generated content. You might not always have that type of engaged customer-base in the first place.

One way to build your social media audience is to use an influencer. That’s just what L’Oreal did, using PONY for makeup videos.

Influencer marketing works particularly well in South Korea, where Kakao Talk and YouTube are among the most popular platforms. South Koreans, on average, have the highest average internet connection speed in the world. And that means video is even more easily accessible.

In South Korea, celebrity endorsements are also especially influential and widely successful. Brands even create commercial music videos with K-Pop idols such as BTS and BlackPink to promote their products.Lotte Duty Free’s series of commercials with K-Pop idols including BTS for example, was a huge success. The brand video, “You’re So Beautiful”, made it to the Top 20 of Google Korea’s “2018 Youtube Advertising Leaderboard”.

That said, you don’t need to pay for a Wendy Cheng or Jian Hao — Instagram influencers in Singapore can cost anywhere from $100- $6,000 a post, and sometimes much more for the larger influencers.

On the more cost-effective end of the scale are the micro-influencers. They focus on a niche, delivering to a more specific, targeted audience, so the audience is often more engaged.

In places like the Philippines, short video ads may be the key to success. while not everyone has their own wi-fi, public wi-fi is everywhere, meaning you need to create an impact quickly! A clever way to do this is to use time-targeted media, such as Sunsilk did with these videos.

If you do have the budget for a TV ad, you should be distributing it everywhere you can. Every video your business makes needs to be available anywhere you can be seen.Pepsi in Vietnam made an ad to run across both TV and YouTube; it has different audiences, and it needs to target them all.

Why not social videos?

We all have video cameras in our pockets. They have the ability to capture high quality video to put on social media, and definitely, your potential audience will be watching.

There’s no excuse not to use social videos as a tool to unlock and engage new customers. What are you waiting for? Talk to our CEO Simon Kearney at [email protected] today.