The Implications Of Data-Driven Marketing Strategies Statistics and storytelling don’t intuitively go hand in hand, but the combination of art and science has been shown to effectively deliver compelling messaging where it counts. The vast variety of topics that can be told with data storytelling demonstrates the creative edge that seemingly cold and unfeeling numbers can give to your story.

In our previous blog post, we demonstrated how two different thought processes generate our conclusions or decisions. Long story cut short, system 1 appeals to emotion, while System 2 appeals to logic and reason.

A refresher on why data storytelling works

With data storytelling, System 2 comes alive and analyses the statistics presented to (hopefully) align with the observations and conclusions made by System 1, strengthening the effect of the narrative on the person. And in an age where all good marketing is storytelling, this narrative technique could be a major boon or a major bane for society, depending on who you are.

Selling more than products and services?

Data can be manipulated and arranged in a way that suits the agenda of the narrative. A look at the ways in which such storytelling has been employed reveals the ease with which agendas are pushed by data. For example, the Economist posted a narrative on how to forecast an American person’s vote in the 2020 US presidential election. 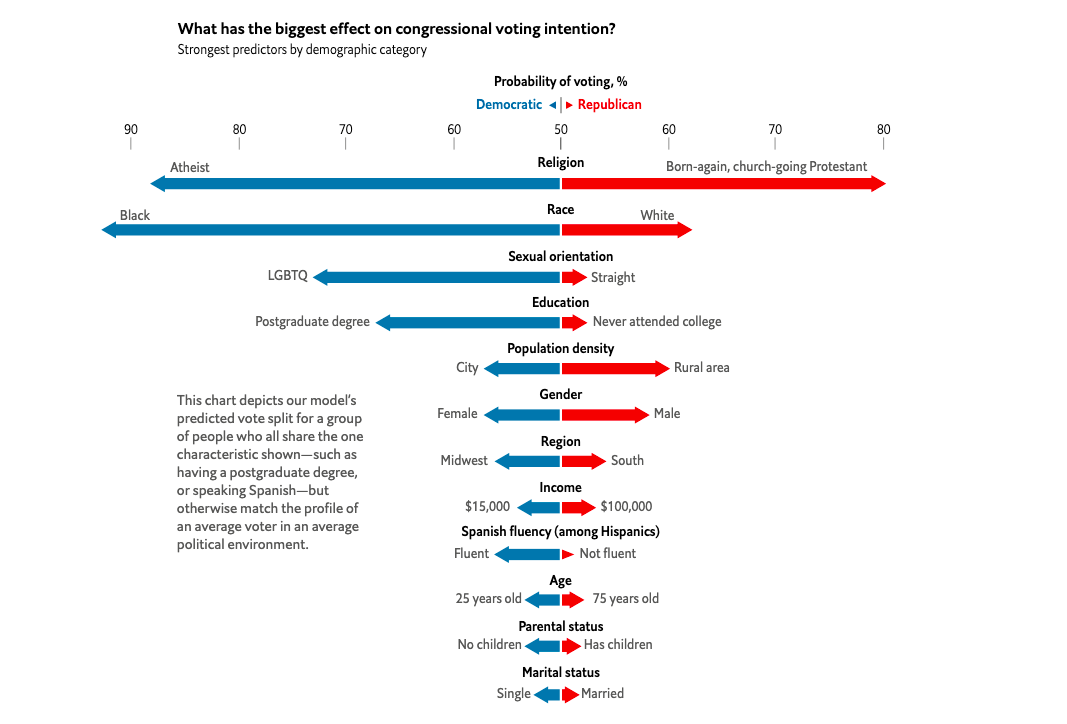 The devil in the digits

Data storytelling is possibly content marketing at its finest. Data can market points of view, as well as push agendas whether they are economic or political ones. In this case, the Economist argues that religion is the biggest factor contributing to where an American person’s vote will go. Having stayed true to its “campaign for liberalism,” one can’t help but notice how data is being used to emphasise the divide between Democrat and Republican values, and perhaps even the slightest hint of contempt for Republican values through the piece.

Clearly, numbers can be used to incite emotions, seen in the above example as well as this dramatic visualisation of the (then) 500,000 deaths from COVID-19 in the US. This seemingly numbers-focused story used statistics to push its narrative of the failure of the Trump administration in dealing with the COVID-19 pandemic. Published in February 2021, at the dawn of the Biden administration, it makes statements with statistics to drive its point (or agenda) home.

Numbers can be about emotions themselves, and data can paint a very accurate picture of human behaviour. In 2005, a software called “We Feel Fine” was launched. This system searches the world’s newly posted blog entries every few minutes for occurrences of the phrases “I feel” and “I am feeling”. Then, going on to find data about the owners of those blogs, it builds up a massive database of human emotions; increasing by 15,000 to 20,000 new feelings per day.

A book published in 2009 discussed the findings of the program. By quantifying something seemingly subjective, the project demonstrated the true universality of feelings. The fact that the online world allowed this insight into human emotion certainly foreshadowed the ways in which human sentiment would be manipulated today.

A sale, manipulation, or both?

Fast forward to the present day, and brand marketing has discovered the treasure trove. Brands use data to bring themselves closer to their consumers. This works in large part due to their ability to give you insight about yourself. It could be Spotify Wrapped telling you things about yourself based on the music you listen to or the playlists you create, or how Airbnb collects data from guests to fill out their Host Stories section on their website.

This personalised information and real-life anecdotes help create an emotional connection between brand and audience. Both strategies are genius because they use numbers and data — usually snoozefest material on their own — to appeal to the thoughts and emotions of the consumer.

As seen above, you can sell and promote virtually anything with a combination of story and numbers, and if you do it right, they’ll mostly sell well. As wooden as numbers seem, it’s really a matter of how humans perceive numbers. Within the frame that is your narrative, data functions as you intend it to. But data alone can be fibbed, even if numbers are famous for never lying.

It’s cheesy but with great data comes great responsibility, and there are definitely people who will abuse that power. The strength of that persuasion is determined by how well it toggles between appealing to our logic systems and to our emotions and beliefs.